This One Pot Creamy Pesto Chicken Pasta was inspired by those little packets of powdered pasta sauce mix I always see in the grocery store. While those little packets are probably great for camping, stocking a bomb shelter, or keeping in your emergency hurricane supplies, I think regular weeknights call for something better. Better but not harder. This Creamy Pesto Chicken Pasta comes together in about 25 minutes, is super luscious and creamy, and uses just a few simple ingredients. 😉

This recipe idea started as just pasta and sauce. Because sometimes that’s all you need to be satisfied. But I like to rummage through my pantry, fridge, and freezer to find leftover ingredients that can be added to whatever I’m cooking. So I ended up with this creamy pesto chicken pasta, with spinach and sun dried tomatoes. But I ate it as just pasta and sauce during testing and it still made me do the happy chair wiggle.

What Type of Pasta Should I Use?

I used penne pasta, but bowties or rotini would also work well. Because this pasta to broth ratio is very important in one pot pastas I can’t vouch for alternative pastas like gluten-free, rice, chickpea, or even whole wheat pasta. They absorb broth differently than semolina pasta and may not work the same in this recipe.

Tips for Success with “one pot” Pastas

One pot pastas can be tricky for some because the pasta is cooked in a much smaller amount of liquid than traditional pasta cooking methods. Here are a few tips to make sure your one pot pasta cooks evenly and to the right texture: 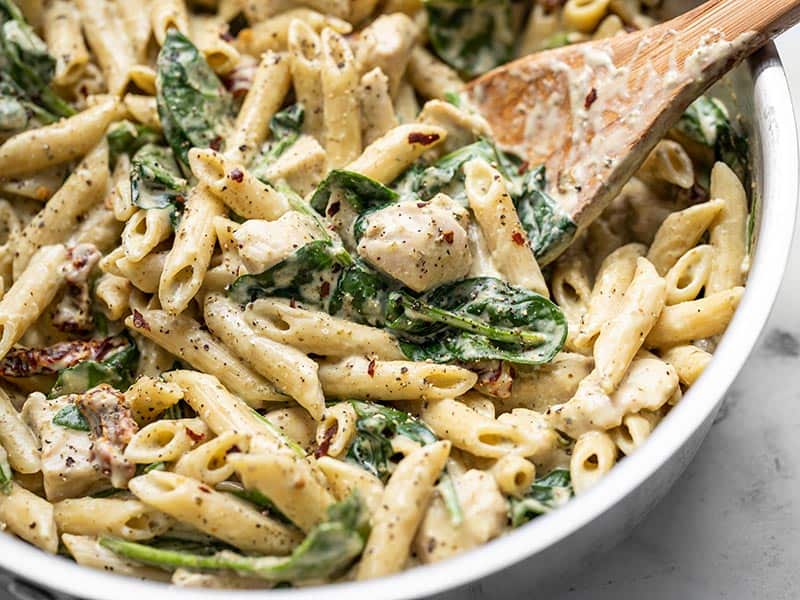 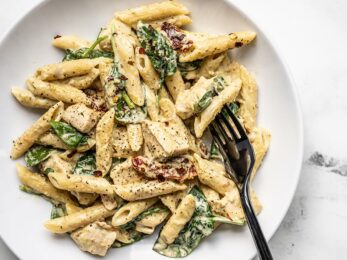 This super lush and Creamy Pesto Chicken Pasta is perfect for busy weeknights. Everything cooks in one pot and is done in under 30 minutes!

*Cream cheese usually has markings on the outer wrapping showing lines for each ounce. Use this as a guide to cut three ounces from the block. 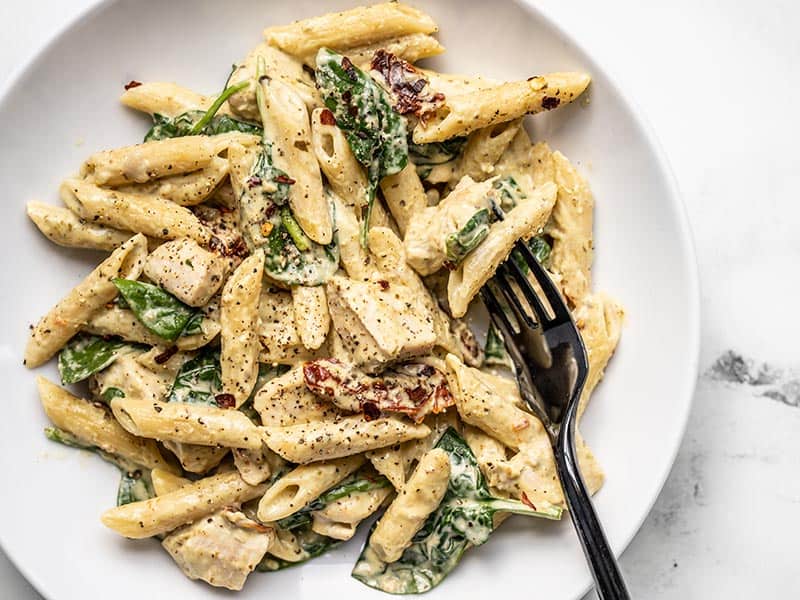 Love one pot pasta? Check out my One Pot Meals category for more! 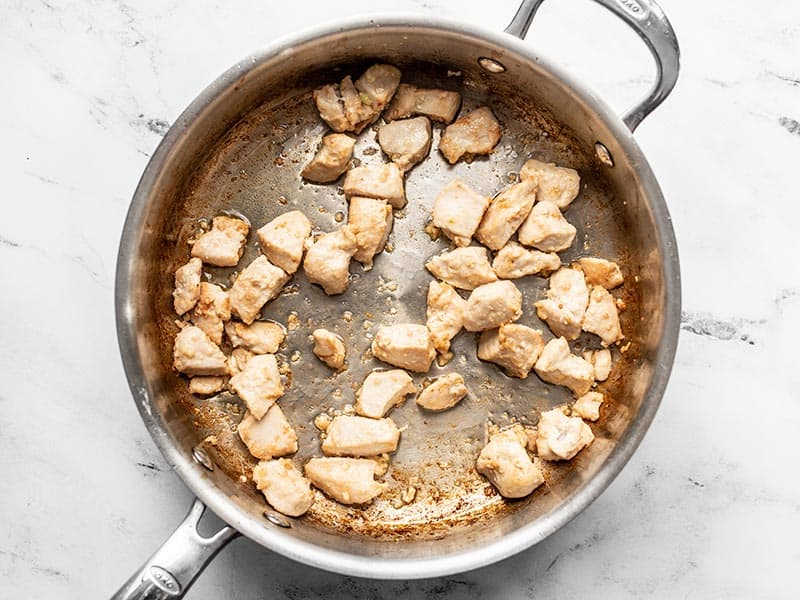 Cut one pound of boneless, skinless chicken breast into 1-inch pieces. Add 2 Tbsp butter to a deep skillet and melt over medium heat. Add the chicken pieces and sauté until the chicken is slightly browned on the outside. Add 2 cloves of minced garlic and sauté for one minute more. (I’m using an OXO 4-quart covered skillet) 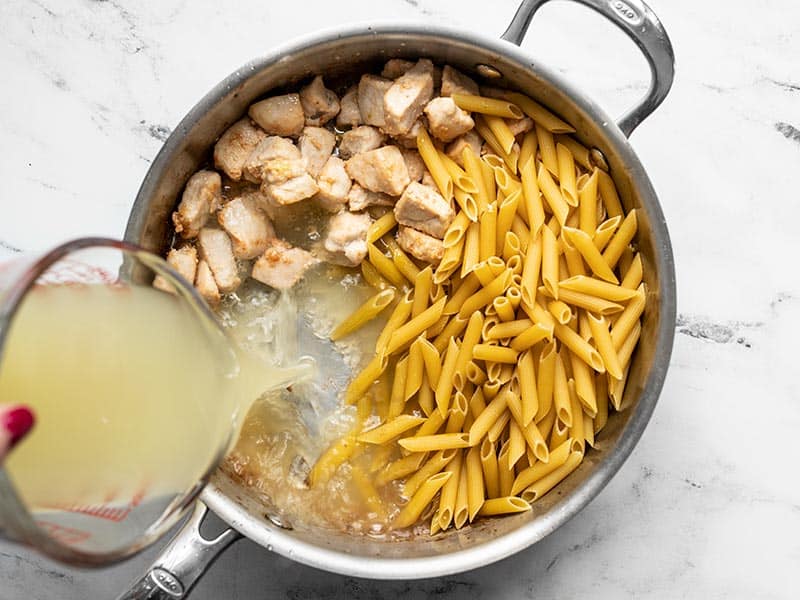 Add 1/2 lb. uncooked penne pasta and 1.5 cups chicken broth to the skillet. Stir briefly to dissolve any browned bits from the bottom of the skillet. 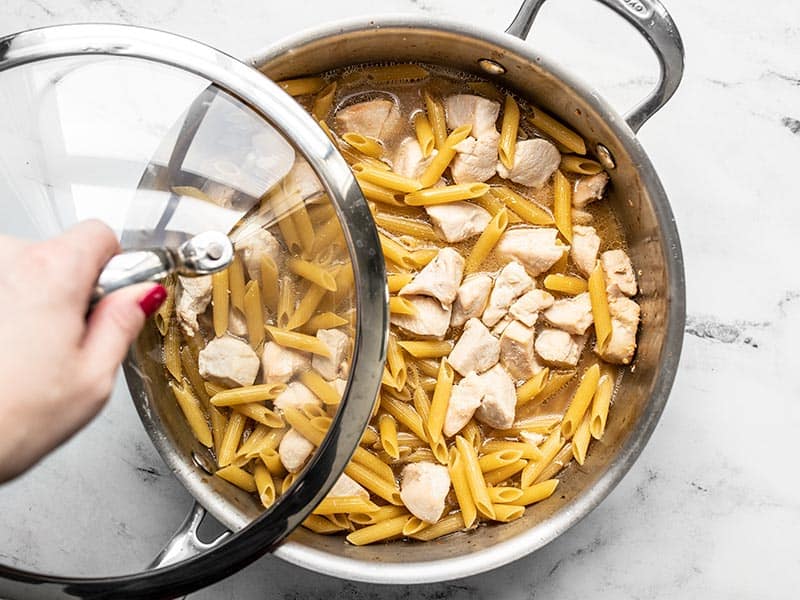 Place a lid on the skillet, turn the heat up to medium-high, and allow the broth to come up to a full boil. 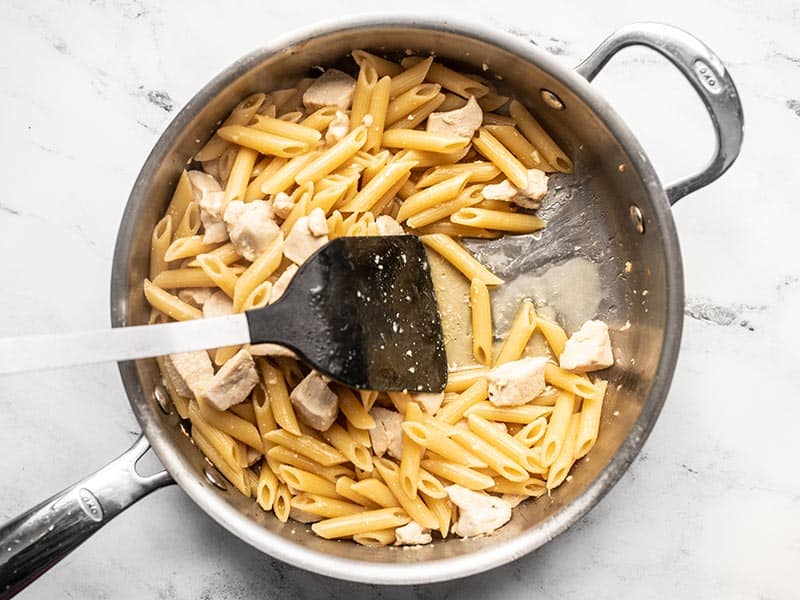 Once the broth comes to a full boil, give the pasta a brief stir, replace the lid, turn the heat down to medium-low and let it continue to simmer for about 8 minutes, or until the pasta is tender and most of the broth absorbed. Stir the pasta every two minutes or so as it simmers, replacing the lid each time.

Add 3 oz. cream cheese (cut into chunks), 1/3 cup pesto, and 1 cup milk to the skillet. Stir and cook the mixture over medium until the cream cheese has fully melted and the sauce is creamy. 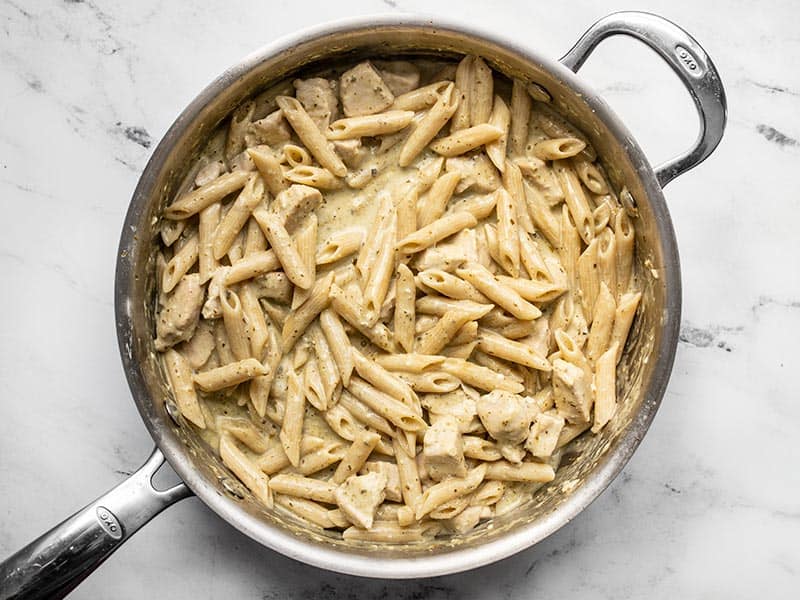 Once the cream cheese has fully melted in, add 1/4 cup grated Parmesan and stir to combine. 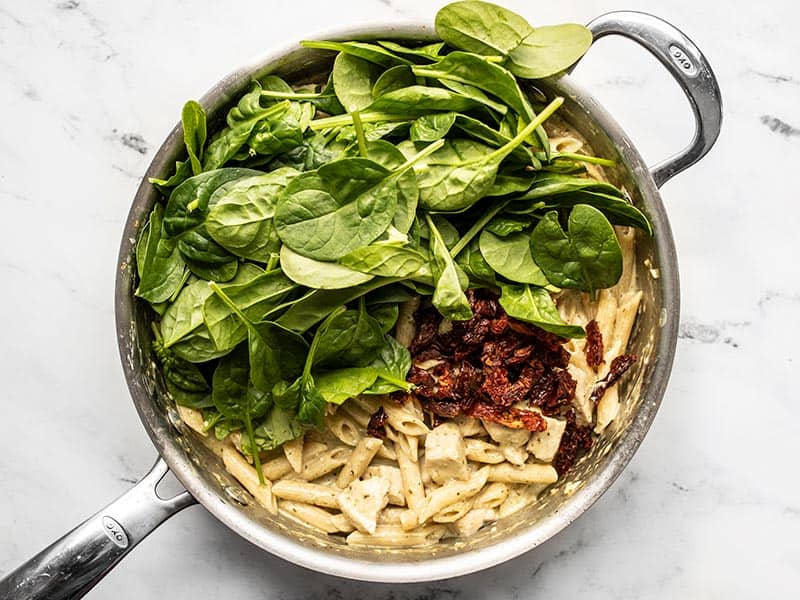 If you’re adding spinach and sun dried tomatoes, like I did, add them once the sauce is finished and stir just until the spinach has wilted, then remove the skillet from the heat. 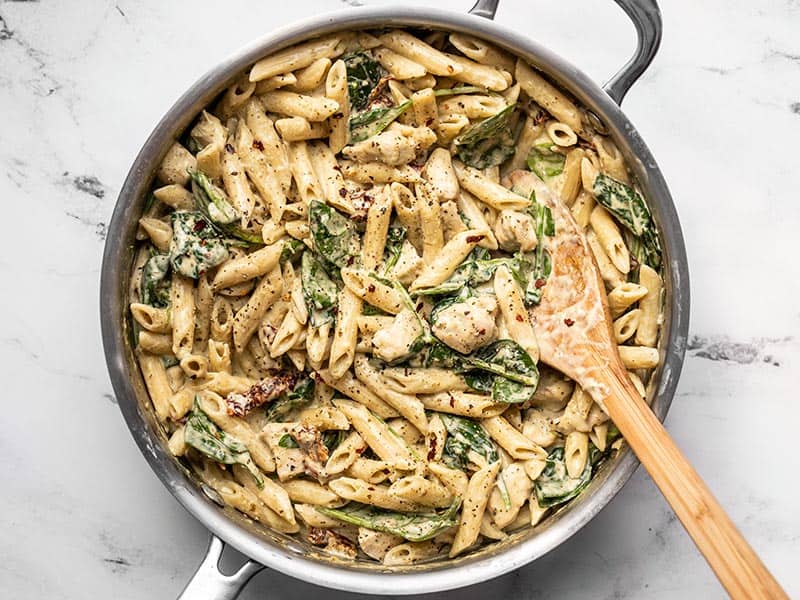 Whether you are using spinach and sun dried tomatoes or not, finish the creamy pesto chicken pasta off with some freshly cracked pepper and a pinch of crushed red pepper flakes. The little pops of flavor that these two bring to the dish really take it to the next level! 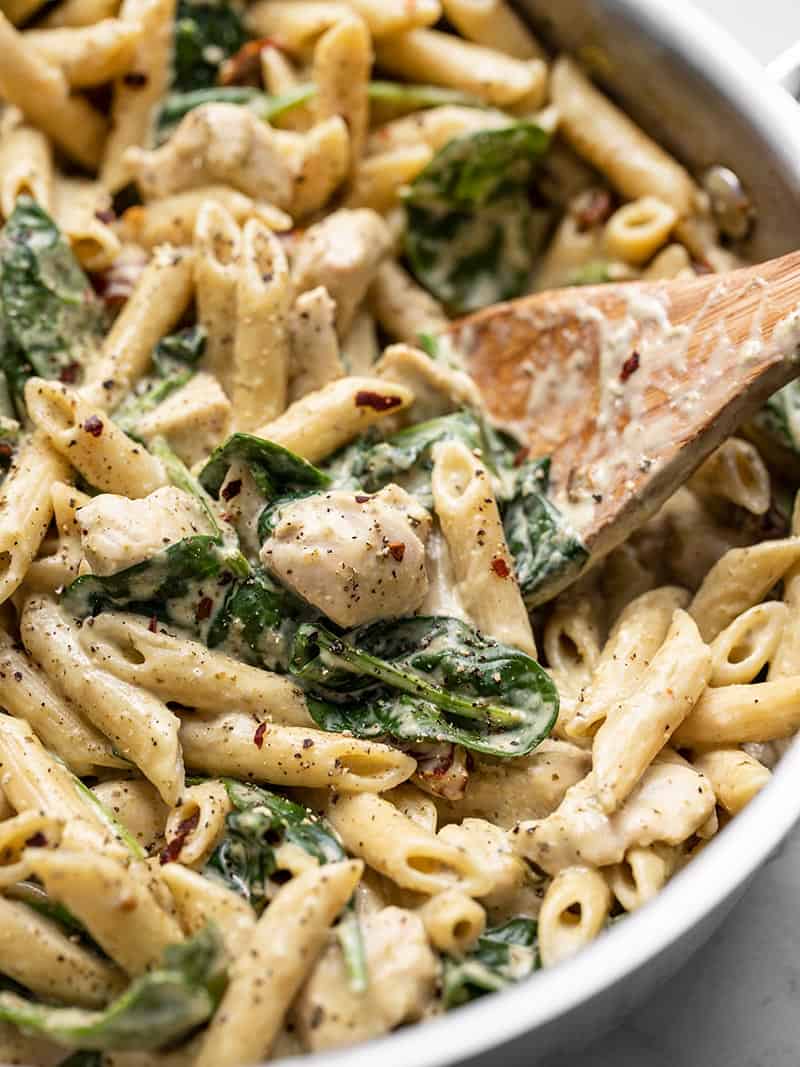